What brings people of different cultures together? How does a roomful of strangers from countries as diverse as India, England, Ghana, Spain, and the US form a bond? Would your first guess be women dancing? Not mine, but let me tell you why it’s true. 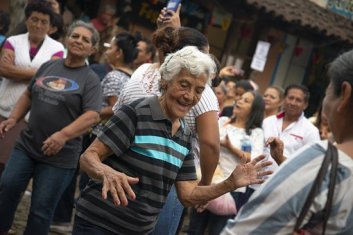 I recently had the opportunity to go on an international cruise and was fascinated by the variety of dress, language, and culture on board. I’ve always been a people person, but while I love making new friends, I’m a little hesitant to reach out when the cultural differences are so strong. Thanks to the language barrier, conversation isn’t always an option and you never know how this person with completely different life experiences might react to your overtures of friendship. So I continued to enjoy the diversity from afar. 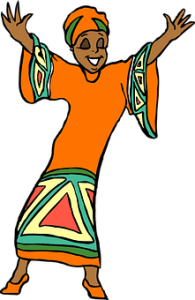 Then one morning as my friend and I were sitting in the lobby, one of the crew members put on some catchy dance music. I noticed one woman at a table in the corner start clapping and nodding her head to the beat and before long she stood and began to dance in her little space. Others applauded and, encouraged, she moved out to the main floor and began to dance in earnest.

A beautiful black woman, she wore robes that suggested Africa, and danced in a flowing, almost ballet style. When the music ended everyone cheered. She grinned and motioned for her elderly mother to join her. This lovely senior citizen rose and made her slow but dignified way towards the front. And, though somewhat bent and arthritic, when the music started . . . she busted some moves! The crowd went wild and more women joined them on the dance floor.

The clincher was the Congo line.  When that started most of the women in the room joined in, and you’ve never so many glowing faces and smiling eyes. As the line wove its way into a circle, people took turns dancing through the middle, encouraged by the applause and support of the entire group. Even those who would ordinarily never dream of dancing in public found themselves having the time of their lives. We laughed and cheered each other on for almost an hour until exhaustion set in and the crowd finally began to disperse.

After that, whenever we’d see each other on the ship we’d high five and grin. No words were necessary. It was, as my friend so aptly put it, a magical experience. What brings people of different cultures together? I think I know – music, dance, smiles, a shared love of connection, and the fact that we have a lot more in common than we realize. My new motto? Get up and dance!