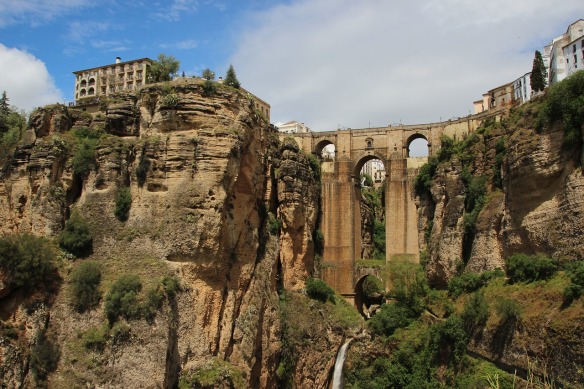 Puente Nuevo bridge is one of Spain’s most photographed sights, and after visiting there on our tour of Spain, it’s not hard to see why.  This medieval masterpiece towers 390 feet above the canyon floor. It’s an amazing feat of engineering made even more so by the primitive tools available at the time. Construction began in 1759 and took 34 years to complete.

A Bridge Too Far

The first attempt at building this bridge was in 1735. It had only one arch, was poorly constructed, and was thrown together in just 8 months. In 1741 it collapsed killing 50 people. The architects Jose Garcia and Juan Camacho, were no doubt out of business after this debacle.

The current bridge was built with longevity and safety in mind. With three upper arches and a lower-middle arch, this structure has stood the test of time.

The Puente Nuevo crosses the Guadalevin River, which flows down a deep gorge. This gorge effectively splits the city of Ronda in half, and while this was a great deterrent to enemy armies, it made it nearly impossible for citizens to get from one side to the other.  Completion of the bridge must have been a godsend to the inhabitants of the town.

While Puente Neuva bridge is a glorious edifice, it has a dark side. The square chamber located in the middle of the bridge was once used to house prisoners. Understandably, few if any escaped.

Another grim chapter in the bridge’s history was during the Spanish Civil War, 1936 – 1939. At this time the prison was used as a torture chamber and captured opponents were tossed off the bridge to a watery grave below – very far below. 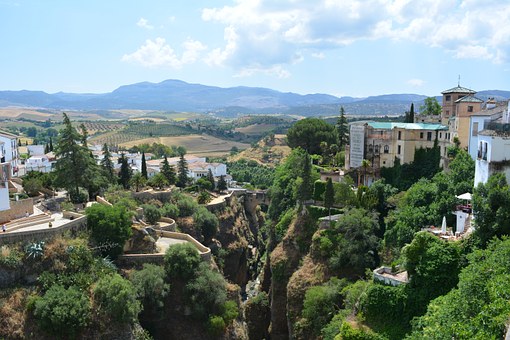 Today Ronda is a sublime and peaceful place. It is reached by a steep road which winds through olive and lemon orchards and past gorgeous old homes. Seeing Puente Neuvo is an unforgettable experience, so if you’re ever in  Malaga make sure and include Ronda in your travel plans.

Have you been to Spain? What was your favorite destination? I’d love to hear from you –

For more of Library Lady’s travels in Spain see “The Mysterious Caves of Drach“.

30 thoughts on “Ronda – a Small Town with a BIG Bridge”