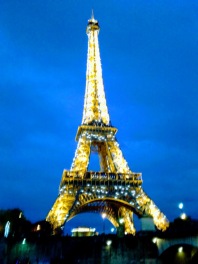 It was midnight in Paris. Sound asleep, I was blissfully unaware that my husband was on his way to meet another woman . . . at her hotel.

It all started that afternoon when we flew into the Charles De Gaul airport. Since one of our travel companions wasn’t feeling well, we grabbed our suitcases from the carousel, hired a cab and hurried to the hotel so he could lie down. My husband John and I were eager to explore the city, so we stashed our bags, checked on our friend and set out to see the sights of Paris. 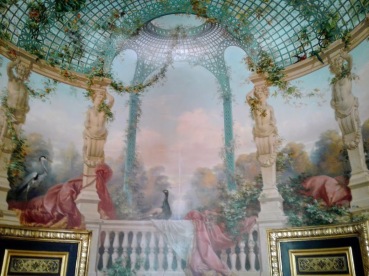 Room from Napolean’s Apartment – The Louvre

We didn’t return until late that evening. It had been a fun but exhausting day, and I watched through bleary eyes as John opened his suitcase and stared in shock. Uh-oh, clearly, all was not well. Upon closer examination, I could see the bag was full of nighties, silk blouses, and skirts.  Hardly my husband’s usual attire.

“These aren’t my clothes,” he said, stating the obvious.

It looked like his. It was the same brand and color and even had a red ribbon attached to the handle for easy identification, but apparently, you can’t judge a bag by its cover.

After discussing our options, we decided it was too late to do anything about this.  We’d have to sort it out the next day.

Problem solved, I lay down and fell sound asleep. Upon waking in the morning, I immediately noticed the suitcase was gone. Burning with curiosity, I may have made more noise than was necessary while getting ready. John finally opened his eyes.

“Where’s the suitcase?” I said.

He slowly shook his head.  “You have no idea what went on last night do you?”

It was then I learned of the midnight assignation.  My scrupulously honest husband felt so guilty about taking the wrong suitcase that he hadn’t been able to sleep.  After searching through the bag (once again) he found a clue that led him to the woman’s husband in North Carolina.  To make a long story short, they talked and John finally connected with Ms. North Carolina.  Since she was leaving Paris first thing in the morning, he agreed to bring the suitcase to her.

After a late-night Film Noire cab ride featuring the sights of Paris by moonlight, he returned the bag to its grateful owner. Unfortunately, she did not have his suitcase to seal the deal because, well, life just isn’t that easy. Mission accomplished John returned to our hotel where he was finally able to get some sleep. As for his bag – thanks to some great detective work on the part of the airline – it was eventually returned to the US, where it reappeared on our front porch.

Moral of the story?  None of this would have happened if we’d been traveling with carry-on luggage; something we firmly resolved to do after this troublesome international incident.  Since then we’ve made two major trips and several short hops with carry-on bags only. It’s really not that hard, even when going to cold climates.

To learn how to bring everything you need in two bags watch for next week’s post entitled – Carry On 101.

This person has way too much luggage. Some of it will get lost.

This is better. You will not be charged to bring these on the plane and they won’t go astray. Stay tuned for great packing tips from the Library Lady Travels!

40 thoughts on “Carry On: The French Connection”